I'm in the office (serving my notice) and waiting for time to fly by to head out for a meeting.

In case if you haven't gotten the hint, I have so tendered. It was not a bad job but just a job. So much so, I couldn't see myself progressing career-wise. In some way or another, I do oh so miss advertising. Insane as it may be, I actually felt it gave me the most sense of achievement. I guess I like the thrill of the chase. The thrill of how one could push for deadlines and meet them at the very last second! The thrill of being able to have the best copy and ideas out for the whole world to see. The thrill of how each ad has to be so meticulous and error free!

I know how sadistic agency life and be. Been there done that. This time I am clearer of what to expect and what I want to expect. Of course communicating such expectations are just as important as to having them. So fingers crossed with the interview.

Moving along from my career choices, my life choices (a.k.a love life) have been quiet. I am (?) currently in this long distance (somewhat) relationship with someone. Then again, he is one who doesn't like labels (as it complicates matters too much). I guess labels are just an easy way to categorize the state of relationship one is in.

I would say we are in a relationship (everyone is) with a dash of romantic nature. While he has returned back to his country, I'm here in Singapore. Bored. I miss dating. I miss nice dinners. I miss being sent home after a date. I had that all last year. And so, I went on a date last night.

A woman has to do what a woman has to do. It was ok. Yup! There's a "but" coming. BUT I sense no spark? I mean like ok, he's a nice guy, relatively cute and funny. BUT not my type? Comprendo much?

Oh well. So next!

Now it's about time I prep and head out for my meeting. I suppose a manicure would be a good idea after........

Maybe it's the effect of vday taking over but I'm feeling fuzzy tonight. The old man is on a flight on his way to London for work. We don't get to meet as much as other couples do. You may ask me why? Don't you love him? My reply is I do but we are matured adults who have our own lives to live.

2012 has been too much of a drama for me. Even till today, I'm still battling if my new guy will usher in 2013 with me (despite being in Myanmar).

Yes. I love my booze and my loud music and my dirty dancing. Somethings I don't want to give up. Maybe until I'm a mother. Now, all I'm asking is for some consistency.

Goodness gracious me. It has been too long a while since I last wrote in this space. I did some glancing on the previous posts I had written, and let me tell you I'm cringing to the immaturity I had written. Well, that's then and let's move on.

Since it's the last month of 2012, I thought I'd write about the year. You know, like a reflections post. Everyone does that. We reflect on the year and grow from there.

So my 2012 started with me fresh out of school. I landed my first job after school as an Account Executive at a local boutique ad agency. To backdate a little, my last semester of UB was rather fun. I did Advertising and Promotional Writing for the final semester. Lo and behold, I had my first and only A in my history of UB. And this A (or rather A-) was for Advertising - a notoriously difficult course of the communications program. *Proud moment here* I guess from then, I realized I wanted to have a career in advertising.

The 4 months I was working at Planet Ads & Design, was a big learning curve for me. With me being me, there have been screw ups. And yes, I did take quite a bit to get over things. Then again, I did excel at my job too. For my last project, I somewhat came up with the copy concept and art direction for one of my then clients. The team was just brainstorming ideas and I thought that would work. And yes the clients bought it and has been using this concept since. Every time I think about it, I feel proud and yet sad. I suppose that's life.

I had 2 months of doing nothing. Not quite. A lot of my peers took time off immediately after school. Me on the other hand went straight into the workforce. It's not a decision I regret but everyone does need a break every now and then. And so I finally took mine. That 2 month sabbatical was not entirely unproductive. I was cooking, I did moderate job hunting and I caught up with friends. It was good. But we know all good things have to end some how. That's when the final phase of my 2012 life took off.

Since August, I have been working as a Marketing Executive at Jean Yip Group. As glamorous as it seems, not everything is a walk in the park. It's been almost 5 months here. And I have to admit, adjusting to another company's culture and work function isn't easy. Till today, there is much for me to learn.

My love life has been a roller coaster ride too! There was Neil, the backlog guy from 2011. I did try to move on and tried to open up to other guys. So in March, Jason came along. It didn't last long but I had fun. Of course, I also knew he wasn't the one. You may ask, "Then why waste your time?" But I guess that's life. You are bound to date people who are just for fun. Jason's 10 years older than me, divorced and has 2 beautiful daughters who I have never met. He's a nice person and did care for me when we were together. Actually he still does when we catch up for drinks.

After Jason, I dated a guy 3 years younger than me. I thought I give it a shot and see where it goes. Gavin's rather good-looking. He's half-Indian and half-Taiwanese. But with him being a boy, he ended things the wrong way. The silent break up. I told him off and he has since apologized.

No matter who I was seeing or dating during the year until November, I wasn't truly happy. I didn't feel that inner happiness from the guys I was with. End of the day, I was still harping over Neil, my backlog from 2011. It was only until last month that I snapped. I was done with Neil's assumption that I would always be there. I cut off my tresses which he had so supposedly love, wanting a fresh start for myself. And it happened.

Today, my fingers are crossed. Hoping that I have found that inner happiness with this guy I'm seeing. Right now, as I'm writing this and listening to our favorite band, The Script, he is in Amritsar, India, on a 10-day sabbatical from work. I'm not going to disclose his identity but for reference sake, he'll be known as my old man due to our age difference. So my old man will be back on Christmas Eve and hopefully things can just take off from where we left them.

Ok. I thought I should write.

It's been almost 2 months since I wrote something here. Little updates to Zelda's life. Been having my Fridays spent at KPO. Kinda turning from that new kid in town to the molded in regular. And quite frankly I miss Butter! And filter. And China One. And Thai discos. Sigh.
It has also been a while since I last blasted Facebook with hot pictures of yours truly. I haven't lost or gained any weight. I guess the only difference about me is the hair. 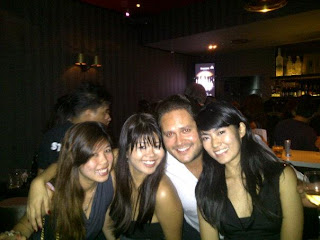 Was at Royal Room with the girls 2 Fridays ago. Yes. Gotten bangs again. And I guess that was prolly the only club shot of me so far. (I'm giving that quizzical brow as I'm writing this)

I'm in my final semester of school. Finally. Then again, I'm enrolled in courses like Advertising and Promotional Writing. Sigh. Means too much work and not enough partying. So not fair! My falsies and sequined dresses are collecting dust! RAWR! Ok. I need to gather the girls for one last time before I end my academic career. NEED!

Another pretty picture before I end. 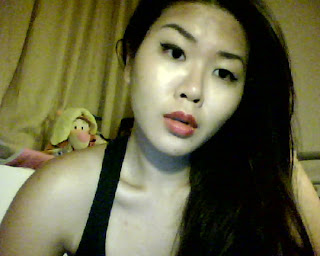 Missed the fireworks again. For reasons that were much more legit than last year's. It's been almost a year since the break up. Quite seriously, I don't feel anything anymore. I'm more excited about what's placed in front of me now. The last 3 months have been really fun. At least things seem to be looking up. :)
Now, back to Public Relations.
Posted by Zelda at 8/10/2011 01:24:00 AM No comments: Links to this post

The end is soon.

I thank you for the contribution to my years growing up from a confused 14 year-old well to a 24 year-old young adult experiencing life. I remember my first Harry Potter book being the Chamber of Secrets. The first book at that time was sold out. So I bought the 2nd and 3rd book, and placed an order for the first book. Your story has helped bonded my family through both the books and films.

It is no doubt a sad ending to the series. I do hope, one day, you'll write on another series. And yes, I do think it is about time for the Harry Potter chapter to close, while a new boy takes that amazing growing up process like you had done for Harry.

Once again, I thank you for the experience. I am so grateful for that delayed train that happened a decade ago. If not for that, the world wouldn't have Harry Potter.

Zelda
Not some game legend. Am so not related to John Legend either.